The Hamers have been serving in Tartu, Estonia since 2002. They have been involved in youth work, church renewal, camp ministry, music ministry and church planting. Currently, they are helping to equip church planters throughout Europe with M4, a European-based church planting platform that helps different nations ignite a church planting movement in their respective countries.  Craig is also coaching and administering M4 in Estonia by training church planters and their teams as well as doing leadership development. Craig is now the pastor of Tartu International Fellowship, an English language local church, reaching Estonians as well as the growing international community. 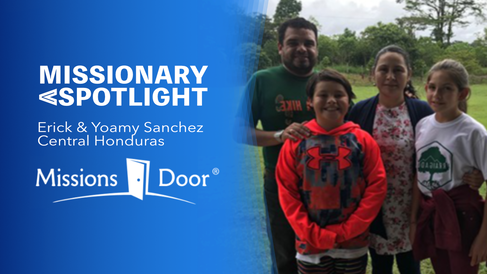 Erick graduated from seminary with the degree of Professor of Theology and received the call to work among the Lenca Indians, a largely unreached group in Central Honduras. He was appointed by Mission Door in April 2004. He now serves as the Mission’s coordinator of the work among the Lenca, focusing on evangelism, discipleship and church planting.

Erick directs and teaches in the leadership training program, which prepares local leaders for church planting in Lenca villages. He also oversees the new association of churches.

He and Yoamy are burdened to reach mountain villages that have been untouched by the Gospel.

​Erick met Yoamy in La Esperanza while she was serving as the director of a Christian elementary school.  Erick and Yoamy were married in August 2006 and in 2006 Yoamy left the school to give herself full time to ministry with Erick. They have two children, Ruth Yoamy and Erick David.